THE MUST-READ MULTIMILLION BESTSELLING MYSTERY SERIES * The final book in the A Good Girls Guide to Murder series that reads like your favorite true crime podcast or show. By the end, youll never think of good girls the same way again... Pip is about to head to college, but she is still haunted by the way her last investigation ended. She’s used to online death threats in the wake of her viral true-crime podcast, but she can’t help noticing an anonymous person who keeps asking her: Who will look for you when you’re the one who disappears? Soon the threats escalate and Pip realizes that someone is following her in real life. When she starts to find connections between her stalker and a local serial killer caught six years ago, she wonders if maybe the wrong man is behind bars. Police refuse to act, so Pip has only one choice: find the suspect herself-or be the next victim. As the deadly game plays out, Pip discovers that everything in her small town is coming full circle . . .and if she doesn’t find the answers, this time she will be the one who disappears. . . And dont miss Holly Jacksons next thriller, Five Surive! Review Praise for Holly Jacksons A GOOD GIRLS GUIDE TO MURDER series: The perfect nail-biting mystery. -Natasha Preston, #1 New York Times bestselling author “Holly Jackson plays off of our collective true crime obsession brilliantly.” -PopSugar “Gripping.”-E! News Online “If you love true crime, murder mysteries, and unstoppable young women, this is the perfect easy-read thriller.” -Business Insider “A knockout series.” -The Nerd Daily “An instant shocker that will leave you on the edge of your seat.” -Los Angeles Times High School Insider This is a great, twisty read for fans of YA. -Book Riot A taut, compulsively readable, elegantly plotted thriller.-The Guardian “A fun, gripping, and skillfully constructed novel of suspense. I loved Pip-her relatable quirks, her inventive investigative approach, and her willingness to step outside of her safe world in search of the truth.” -Emily Arsenault, author of All the Pretty Things Dark, dangerous and intricately plotted-my heart literally pounded. -Laura Steven, author of The Exact Opposite of Okay So so clever. -Savannah Brown, author of The Truth About Keeping Secrets “Well-executed…. A treat for mystery readers who enjoy being kept in suspense.” -Kirkus Reviews Legions of fans of true crime podcasts may therefore flock to this one, and they’re unlikely to be disappointed. -Bulletin Fans of true crime will be hooked by the hunt for a killer, but there’s more to this Guide than just a whodunit. It’s a story of families, community and the ways a crisis can turn them against one another in the blink of an eye. -BookPage About the Author Holly Jackson is the #1 New York Times bestselling author of the A Good Girls Guide to Murder series. She started writing stories at a young age, completing her first (poor) attempt at a novel when she was fifteen. Holly graduated from the University of Nottingham, where she studied literary linguistics and creative writing, with a masters degree in English. She enjoys playing video games and watching true-crime documentaries so she can pretend to be a detective. She lives in London. Follow Holly on Twitter and at @HoJay92. Excerpt. © Reprinted by permission. All rights reserved. One Dead-eyed. That’s what they said, wasn’t it? Lifeless, glassy, empty. Dead eyes were a constant companion now, following her around, never more than a blink away. They hid in the back of her mind and escorted her into her dreams. His dead eyes, the very moment they crossed over from living to not. She saw them in the quickest of glances and the deepest of shadows, and sometimes in the mirror too, wearing her own face. And Pip saw them right now, staring straight through her. Dead eyes encased in the head of a dead pigeon sprawled on the front drive. Glassy and lifeless, except for 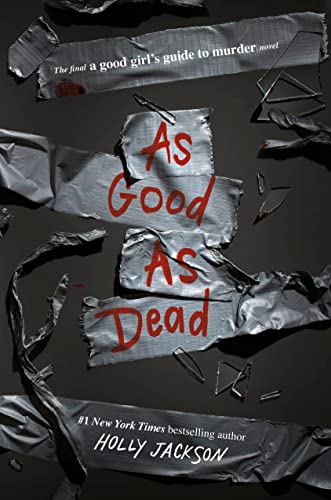