Review A really interesting masterpiece for a relaxed yoga morning, but just as well suited for afterparty laziness. -- Mushroom Magazine, June 2006This CD comprises an amazing audio journey to revisit over and over. -- Yogi Times, April 2006 On their first full album release, DESERT DWELLERS meld elements of downtempo and psy-chill with sinewy basslines, otherworldly guitar and an exotic mix of organic instruments into an Indo-ambient mystical fusion. This recording, along with the forthcoming DOWNTEMPLE DUB: FLAMES, was originally conceived as the soundtrack to the DVD Series DUNCAN WONG YOGIC ARTS. That project allowed DESERT DWELLERS to push the bounds of Yoga music into a new realm of musical fusion called “Yoga Dub”: electronic devotional music blending the boundaries of rhythmic ambience while incorporating such traditional instruments as subahar, tabla, udu, erhu, cello and voice. The emphasis is always on the space between the music, allowing for a non-intrusive soundscape to support rather than distract from the listener’s activity. Produced by CRAIG KOHLAND, founder of the SHAMANS DREAM ENSEMBLE, DOWNTEMPLE DUB: WAVES pulses with lush rhythms and serene harmonies, guiding a sonic odyssey into the soul of the global heartbeat. From the Artist Desert Dwellers roots lie in a thriving community of provocative artists, creative thinkers, and progressive-minded individuals based on the West Coast. Since the early 90s, our extended family has assembled regularly, forming a sacred space where people can relax, tune in and bliss out to chillout, ambient and downtempo music produced by a loosely-knit collective of DJs and producers. These gatherings have extended the frontier of electronic dance music and today form the epicenter of the techno-tribal renaissance movement. DownTemple--in addition to being the title for this new music series--is also the theme for some of these downtempo events, where a vision of promoting a conscious way to walk peacefully in the world is shared by all. When White Swan suggested the name DownTemple Dub for this series, we were stunned by the synchronicity, as the organizers for Downtemple are some of our closest friends and share our eagerness to spread the ethos of Downtemple and Desert Dwellers alike. This is the intent written into our music: that it may contribute to the overall well being of the people living on this planet. Music is our key to healing. Music is our key to finding fellow travelers during these intense times, and it is our key to understanding the great depths of human emotion, and our potential to soar. And so it is with great gratitude and peace that we offer DownTemple Dub to you. About the Artist Rara Avis and Amani Friend are DESERT DWELLERS. Hailed as a “musical mastermind” by LA Yoga magazine, Rara Avis’ incendiary global tapestries ignite the heart and fuel the dance floor fire. Whether he’s improvising world fusion music with the Shaman’s Dream World Groove Ensemble or composing original electronic music with evocative guitar and vocals, Rara’s sound is an ever-evolving palette of vibrational color full of soulful surprises. Since his first piano composition at age seven, Amani Friend has divined influences from the full range of the musical spectrum. Equally adept on didgeridoo, world percussion and keyboards, Amani applies a genre-defying vision to his innovative electronic productions. In 1999, he began collaborating with DJ Treavor of Moontribe on the Amani vs Teapot project, introducing his unique brand of progressive trance and ethnic-tribal grooves to the international underground dance community. Amani and Rara were born less than 48 hours apart in the year of the Dragon. These longtime friends share many cosmological connections, animal totems, spiritual practices and an obvious and uninhibited passion for the musical diversity of the Universe. 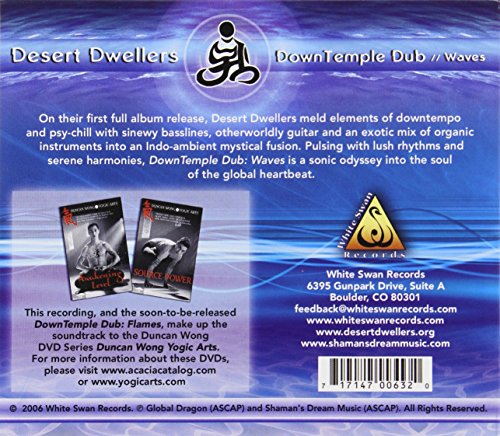