An eye-opening look at how young Arab- and Muslim- Americans are forging lives for themselves in a country that often mistakes them for the enemy Just over a century ago , W.E.B. Du Bois posed a probing question in his classic The Souls of Black Folk: How does it feel to be a problem? Now, Moustafa Bayoumi asks the same about Americas new problem-Arab- and Muslim-Americans. Bayoumi takes readers into the lives of seven twenty-somethings living in Brooklyn, home to the largest Arab-American population in the United States. He moves beyond stereotypes and cliches to reveal their often unseen struggles, from being subjected to government surveillance to the indignities of workplace discrimination. Through it all, these young men and women persevere through triumphs and setbacks as they help weave the tapestry of a new society that is, at its heart, purely American. Review “As Moustafa Bayoumi argues in his provocative investigation, young Arab-Americans are still struggling to define their identities in a hostile environment and to cope with the governments distrust…despite what they have suffered and continue to endure, Bayoumi and his interview subjects still hope that America is a place where they can live in peace-and find justice, fairness, and freedom.” -Francine Prose, O Magazine “In How Does It Feel to Be a Problem? Bayoumi…gives twenty-something Arab-Americans the chance to talk about their victories and defeats.” - The Wall Street Journal “These are great stories about people who might be your neighbors, and Bayoumi delivers them with urgency, compassion, wryness and hints of poetry. You may walk away from the book with a much greater understanding of Arab-American life, but youll feel thats simply because youve hung out with Bayoumi and friends, snarfing down Dunkin Donuts or puffing on hookahs, talking about vital issues.” -Salon “Bayoumis book fascinates.” -Deborah Douglas, Chicago Sun-Times “Moustafa Bayoumis How Does It Feel to Be a Problem? has an intimate feel, as the author listens closely to the dreams and realities of seven young Arabs living in post-9/11 America.” - Dallas Morning News “an indispensable guide…a well-written book on a subject that is often overlooked or treated as a side note to bigger problems, like the occupation of Iraq, Israeli aggression and civil liberties.” - The Arab American News “Bayoumi succeeds in presenting the reader with more than just a glimpse into these lives. One is right there with Rasha, a Palestinian-American teenager, who was detained along with the rest of her family without reason following 9/11. This first story is the most chilling as one can sense the frustration and dread emanating from Rasha’s story. I have heard about things like this happening but to actually read about 19-year-old Rasha and what she and her entire family had to endure is something else. Bayoumi’s decision to talk to Arabs from Brooklyn was a wise one as these stories are reflections from a group of people that not only have bared the brunt of discrimination, but call New York City their home and therefore, 9/11 affected them as it did most New Yorkers. By providing a book accessible to the masses, Bayoumi gives the Arab problem a very human face that other Americans can empathize with.” - MediaandIslam “Bayoumi offers a revealing portrait of life for people who are often scrutinized but seldom heard from.” - Booklist(starred review) “In many ways, [Bayoumi’s] absorbing and affectionate book is a quintessentially American picture of 21st century citizens ‘absorbing and refracting all the ethnicities and histories surrounding [them].’ However, the testimonies from these young adults-summary seizures from their homes, harassment from strangers, being fired for having an Arab or Muslim name-have a weight and a sorrow that is ‘often invisible to the general public.’” - Publishers Weekly (starred review) The book’s title derives from 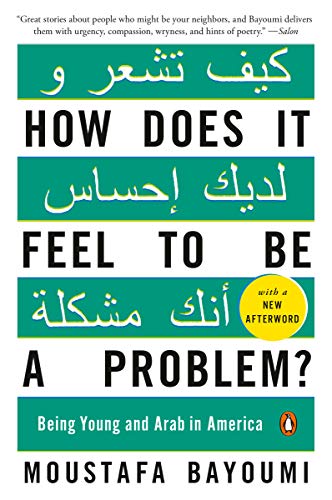 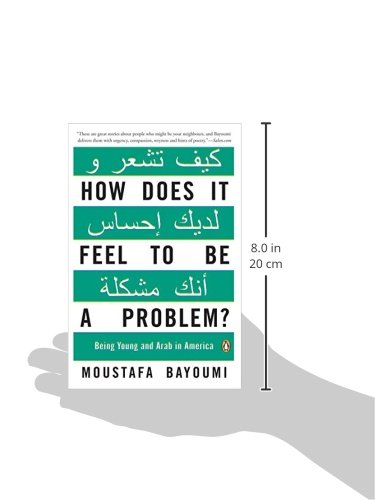 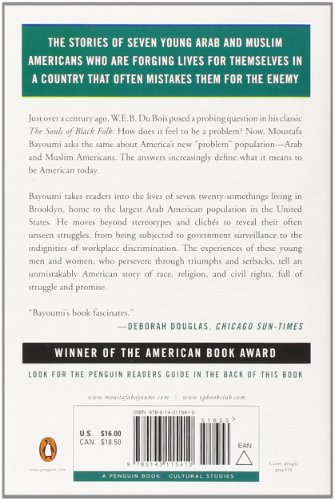