Seventeen hundred years ago, key elements of our ancient heritage were lost, relegated to the esoteric traditions of mystery schools and sacred orders. Among the most empowering of the forgotten elements are references to a science with the power to bring everlasting healing to our bodies and initiate an unprecedented era of peace and cooperation between governments and nations. In his groundbreaking new book, The Isaiah Effect, Gregg Braden turns to the Isaiah Scroll, perhaps the most important of the Dead Sea Scrolls discovered in 1946, to offer insight into a powerful form of ancient prayer. In The Isaiah Effect, Braden, author of Awakening to Zero Point and Walking Between the Worlds, combines research in quantum physics with the works of the prophet Isaiah and the ancient Essenes. He demonstrates how prophecies of global catastrophe and suffering may only represent future possibilities, rather than forecast impending doom, and that we have the power to influence those possibilities. In addition to describing multiple futures, the Isaiah texts take us one step further, clearly describing the science of how we choose our futures. Tracing key words of Isaiahs text back to their original language, we discover how he taught a mode of prayer that was lost to the West during Biblical editing in the fourth century. Braden offers detailed accounts of how elements of this mode of prayer have been applied in a variety of situations, ranging from healing life-threatening conditions to entire villages using collective prayer to prevail during the 1998 fires in southern Peru. In each instance, the correlation between the offering of the prayer and a shift of the events in question was beyond coincidence--the prayers had measurable effects! As modern science continues to validate a relationship between our outer and inner worlds, it becomes more likely that a forgotten bridge links the world of our prayers with that of our experience. Each time we engage ourselves, our loved ones, and our communities with Isaiahs life-affirming message of hope, we secure nothing less than our future and the future of the only home we know. Review The Isaiah Effect: Decoding the Lost Science of Prayer and Prophesy draws on new discoveries in quantum physics, as well as a variety of spiritual traditions and religious documents--including Tibetan, Mayan, and Hopi prophecies; Nostradamus; and the Dead Sea Scrolls. From these sources, author Gregg Braden believes that he has recovered a lost science with the power to bring a lasting end to all war, disease, and suffering; initiate an unprecedented era of peace and cooperation between governments and nations; render destructive patterns of weather harmless; bring lasting healing to our bodies; and redefine ancient prophecies of devastation and catastrophic loss of life. Mass prayer is the technique that will allow all of these goals to be achieved, Braden says: the choice of many people, focused in a specific manner, has a direct and measurable effect on our quality of life. The book includes careful readings of ancient texts, prophetic pronouncements, and mini-travelogues (Braden leads groups to visit sacred sites around the world), and its arguments may strike some readers as far-fetched. But Bradens basic idea--that hope can change the world in concrete ways--is a very good one. From Publishers Weekly Braden, author of Walking Between the Worlds and Awakening to Zero Point, examines one of the ancient texts found in the 1947 discovery of the Dead Sea Scrolls at Nag Hammadi. Braden contends that scholars have misinterpreted the Isaiah Scroll, which opens with apocalyptic visions of massive global destruction followed by a time of peace. The author claims that the scroll contains the key to a lost scientific tradition that promises to end war and heal our bodies. Indeed, he contends, Isaiahs prophecies can help us make sense of recent changes in climat 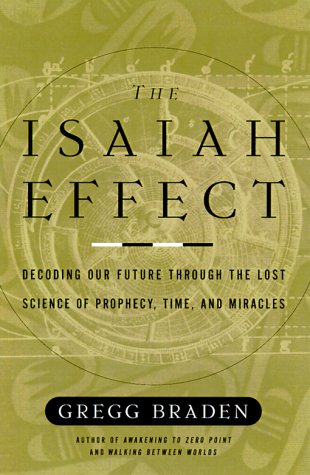