Farrah Gray is no ordinary teenager. He wears a suit and tie; he has an office on Wall Street and another one in Los Angeles . . . and he sold his first business at the age of 14 for more than a million dollars. He invested that money in a partnership with Inner City Broadcasting, one of the most prominent African-American owned businesses in the country, and now is heading the relaunch of their signature magazine, InnerCity. According to People magazine, Farrah is the only African-American teenager to rise from public assistance to a business mogul without being in entertainment or having a family connection. Reallionaire tells Farrah’s extraordinary and touching story. When he was just six, Farrah’s mother became seriously ill, prompting his decision to provide for this family, and he spent the first $50 he ever made taking them for a real sit-down dinner. At the age of eight, he founded his first business club. By fourteen, with a million dollars in his pocket, Farrah was well on his way to business success. Each stage of Farrah’s progress is marked by one of the principles of success he learned along the way, creating not just an extraordinary story but also a step-by-step primer for others to create success in their own lives with honor; charity and compassion. In the tradition of great motivators and leaders, this is both an instructional book and a story to inspire others to live life to the fullest. And readers don’t have to be interested in business to enjoy it. In fact, Farrah is a role model for everyone. From Publishers Weekly Just 20 years old, Gray is a self-made millionaire, having founded ventures and made media appearances beginning at ages six and nine respectively. He chronicles and draws lessons from his successes and failures, from his first job selling handmade body lotion to his Los Angeles neighbors to his founding of Farr-Out Foods at 13, his sale of it two years later for over a million dollars and his current philanthropic and developmental projects like running INNERCITY magazine. With the help of freelance writer Harris, Gray presents a persona that is straightforward and confident, if somewhat generic (Now, I want you to take a real lemon from your life and make lemonade with it), but the tale of his ascent is compelling. Fueled by his desire to help his family, especially his single, workaholic mother, Gray is virtually unstoppable; faced with rejection, he tries something else. Its that resilience that comes through most clearly, reinforced with chapter-ending Real Points and Reallionaire Exercises. Despite the familiar gimmicks, the real parts of Grays experience come through, making this a sound book for anyone seriously interested in getting ahead on his or her own terms. Copyright © Reed Business Information, a division of Reed Elsevier Inc. All rights reserved. From Booklist Nineteen-year-old Gray grew up in the projects in Chicago and formed his first business organization at age 7, inspired by his mothers will and determination. By age 15, he had developed his own food company for kids, Farr-Out Foods, which he sold for $1.5 million. He has lived in Japan, England, New York, and Las Vegas; hosted the celebrity TV show Backstage Live; and is in high demand as a public speaker. It may be hard to believe that sound business advice can come from a teenager, but Farrah Gray is no ordinary kid. Although the book is punctuated with what he calls Real Points for success and exercises for things like building a great team and seizing opportunities, the real inspiration is his personal story, which speaks strongly of the importance of mentoring to young people and sends the message that you should never underestimate anyone, especially yourself. Farrah is a young man of true character and integrity, and we surely havent heard the last of him. David Siegfried Copyright © American Library Association. All rights reserved From the Inside Flap Au 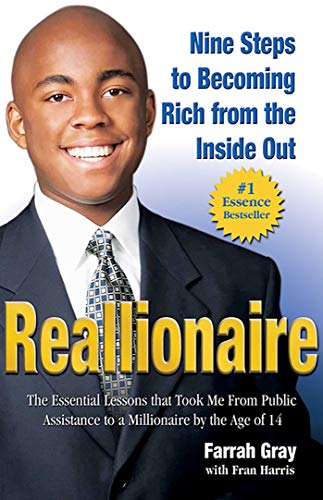 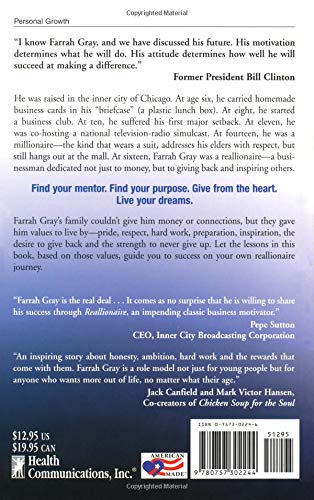