An in-depth look into the physics behind martial arts. Whether you are an experienced martial artist or a curious enthusiast, this book gives you an “unfair advantage” by unraveling the complex science of effective fighting techniques and examining the core principles that make them work. Did you know? Momentum is for knocking people over Energy is for breaking bones and causing pain A haymaker travels 3.14159 times farther than a jab You are only an “object” when you are rigid Fight Like a Physicist blends inquiry, skepticism, and irreverent humor all while punching holes in myth and mysticism. Highlights include Making physics your “unfair advantage,” in the ring and on the street Examining center of mass, pi, levers, wedges, angular momentum, and linear momentum for martial artists Reducing traumatic brain injury in contact sports Exposing the illusion of safety provided by gloves and helmets Overturning conventional wisdom on compliance during an assault Busting up Hollywood action cliches Fight Like a Physicist reads like a manifesto on the rational practice of martial arts. It’s intelligent, fun, and dangerous and nothing short of iconoclastic. Review Thalken explores how physics can be applied to martial arts.More than a body of facts, Thalken sees physics as a practical discipline: an approach that can be applied to any number of pursuits. His chosen pursuit is martial arts. As in physics, the author says, no authority or status can make a martial artists technique effective. Testable and reproducible results hold all the power. His thesis is that by understanding the way the human body moves and balances, a martial artist can gain the upper hand on opponents who do not approach their sport scientifically. Thalken outlines the way concepts from physics reveal strategies in fighting the center of mass is important for leg sweeps and grappling, hits that travel shorter distances will arrive with greater force and speed, etc. He also debunks common misconceptions about equipment. For example, boxing gloves are not “safer” than bare knuckles; while they distribute force over a wider area, causing fewer breaks in the skin, they allow the fist to strike with more momentum and hit hard surfaces (like the head) more frequently. He also delves into many of the myths propagated by media portrayals of martial arts as well as the pseudoscience propagated by practitioners of martial arts themselves. A relatively short book, the work is more primer than instruction manual, advocating a perspective as opposed to promoting individual exercises or training regimens. There is an infectious energy to Thalkens prose, one that sells both the no-nonsense combat analysis and the cool skepticism of the physics discussion. As a guidebook, the text has very little fat: section titles like, “Where Is My Center of Mass, and Why Do I Care?” keep readers assured Thalken isnt trying to force more information on them than needed. The author is an apt communicator of even the more abstract ideas, putting them into a simple, intuitive context. Its unclear if thinking like a physicist can actually win a fighter matches, but it certainly provides a new grammar for thinking about the ways in which our bodies move.An enlightening book for martial artists seeking a competitive edge., Kirkus Fight Like a Physicist is a cool concept that makes physics tangible for fans of fighting sports.As a martial arts practitioner with a doctorate in physics, Jason Thalken has an interesting perspective on fighting sports, and he applies his knowledge of scientific principles to his chosen sport in Fight Like a Physicist. Though there probably isnt quite enough material here for a full book, the early sections do a solid job explaining the physics in a relatable way that gives fighters some perspective on how to incorporate scientific knowledge to fight better.Fight Like a Physicist finds a nice middle ground in terms of the materials 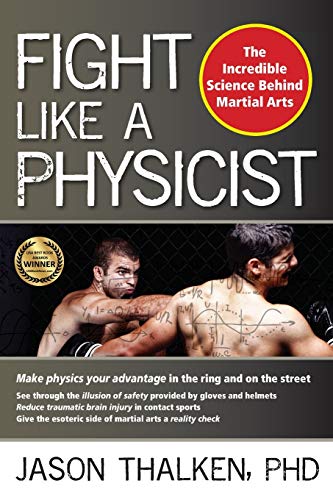 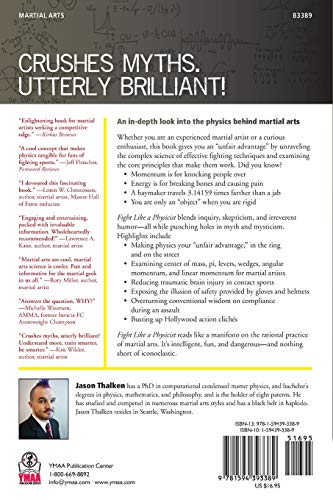