From the bestselling author of Waking Up and The End of Faith, an adaptation of his wildly popular, often controversial podcast“Civilization rests on a series of successful conversations.” Sam Harris Sam Harris neuroscientist, philosopher, and bestselling author has been exploring some of the most important questions about the human mind, society, and current events on his podcast, Making Sense. With over one million downloads per episode, these discussions have clearly hit a nerve, frequently walking a tightrope where either host or guest and sometimes both lose their footing, but always in search of a greater understanding of the world in which we live. For Harris, honest conversation, no matter how difficult or controversial, represents the only path to moral and intellectual progress. This book includes a dozen of the best conversations from Making Sense, including talks with Daniel Kahneman, Timothy Snyder, Nick Bostrom, and Glen Loury, on topics that range from the nature of consciousness and free will, to politics and extremism, to living ethically. Together they shine a light on what it means to “make sense” in the modern world. About the Author Sam Harris is the author of five New York Times best sellers. His books include The End of Faith, Letter to a Christian Nation, The Moral Landscape, Free Will, Lying, and Waking Up. The End of Faith won the 2005 PEN Award for Nonfiction. His work has been published in more than 20 languages. He has written for the New York Times, The Los Angeles Times, the Economist, the Times (London), the Atlantic, the Annals of Neurology, and elsewhere. Harris is also the host of the Making Sense podcast and creator of the Waking Up app. He received a degree in philosophy from Stanford University and a Ph.D. in neuroscience from UCLA. Visit his website at SamHarris.Org. Review “Harris displays his skills as an interviewer and conversationalist capable of clarifying complex ideas and engaging scholars from diverse backgrounds and fields of study on their areas of expertise. . . . The result is a collection full of stimulating, nuanced, and deeply informed discussions on both abstract concepts (the future of humanity; the nature of reality) and hot-button current events (the #MeToo movement).” ( Publishers Weekly) Review “Free and open debate, in the best sense of the word. . . . The book’s advantage over the podcast is that readers can linger as they need to and cherry-pick interviews at will. Recommended for anyone who wants to spend time with intelligent minds wrestling not with each other but with understanding.” ( Kirkus Reviews) Review “Theres only one podcast I never miss, and it’s the one that has the most appropriate title in all of broadcasting. Does anyone simply make more sense than Sam Harris?” (Bill Maher) Review “Sam Harris is the most intellectually courageous man I know, unafraid to speak truths out in the open where others keep those very same thoughts buried, fearful of the modish thought police. With his literate intelligence and fluency with words, he brings out the best in his guests, including those with whom he disagrees.” (Richard Dawkins, author of The Selfish Gene) Review “One of the most consistently intelligent and thought-provoking shows out there, and not just in the podcast space. Sam’s is a much-needed voice during these unprecedented times.” (Ian Bremmer, author of Us vs. Them: The Failure of Globalism) Review “Even in casual discussion, Sam is intelligent, educated, honest, considered and brave. He’s really not cut out for the Internet.” (Ricky Gervais) Review “Sam Harris is a genius and his podcast explores many of the important issues of our time. (Yes it’s as good as that sounds.) Sam is a voice of reason and science in an era that needs both more than ever. The Making Sense podcast essentially launched my presidential campaign.” (Andrew Yang) Review “I don’t have many can’t miss podcasts, 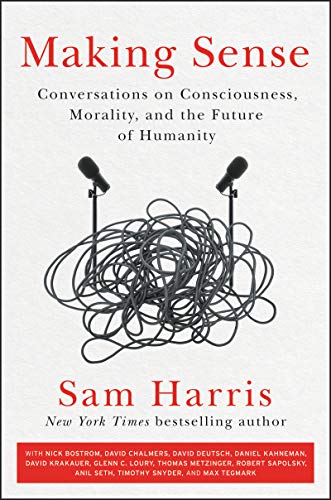