From a leading international authority on manic-depressive illness--and one of only a handful of women who are full professors of medicine--comes a remarkable personal testimony: the revelation of her own struggle since childhood with manic-depression, and how it has shaped her life. Review From Kay Redfield Jamison - an international authority on manic-depressive illness, and one of the few women who are full professors of medicine at American Universities - a remarkable personal testimony: the revelation of her own struggle since adolescence with manic depression, and how it shaped her life. With vivid prose and wit, she takes us into the fascinating and dangerous territory of this form of madness - a world in which one pole can be the alluring dark land ruled by what Byron called the melancholy star of the imagination, and the other a desert of depression and, all too frequently, death. From Publishers Weekly Johns Hopkins psychiatry professor Jamison, whose Touched with Fire addressed the link between manic-depressive illness and creativity, offers a poignant and powerful memoir of her own struggles with and triumphs over the disease. Her story suggests that, yes, with lithium as regulator, psychotherapy as sanctuary, professional support and love, manic-depressive illness can be managed. The illness is often genetic, and Jamisons exuberant but depressive father was a portent. Her first wave of mania came in high school, but college was a struggle marked by violent moods and passions, and grad school pushed her over the edge. During her first decade on lithium, the drugs side effects blurred her vision so that she could concentrate only on journal articles or poetry. Eventually she attempted suicide. The authors traumas helped drive her academic passions; her work also led her to a happy marriage. She has not had children of her own and raises eloquent?unanswerable?questions about manic-depressives bearing children. 75,000 first printing; Literary Guild and Doubleday Book Club alternates; author tour. Copyright 1995 Reed Business Information, Inc. From Library Journal This incredibly insightful work chronicles the life of a psychologist and professor of psychiatry at Johns Hopkins University who suffers from manic depression. Jamison began experiencing mood swings during adolescence but, despite her education and training, did not seek help until she had completed her doctorate and began teaching at UCLA. Like so many others suffering from manic depression, she felt initially that the depressions were only passing phases shed have to work out herself. She experienced the manic phases as great periods of creativity and accomplishment and feared they would be deadened by using medication. (In an earlier book, Touched with Fire, LJ 2/15/93, Jamison explored the relationship between manic depression and creativity.) Jamison finally comes to grips with her illness and recognizes the importance of medication used in conjunction with psychotherapy. This combination of treatment controls her illness and has enabled her to succeed. Her story and writing style are both inspirational and educational. Highly recommended for all libraries. Jennifer Amador, Central State Hosp. Medical Lib., Petersburg, Va. Copyright 1995 Reed Business Information, Inc. From Booklist Psychologist Jamisons controversial Touched with Fire (1993) explored the hypothetical link between artistic creativity and mood disorders, speculating that manic-depressive illness, which may be inherited, somehow enables art while ravaging the artist. Perhaps written in response to opponents of biological psychiatry and accusations of romanticizing the creative possibilities of serious mental illness, her new book recounts her own frightening experience as a manic depressive--a condition she regards as genetically rooted and has publicly disclosed only recently because of her professional position. Although Jamison i 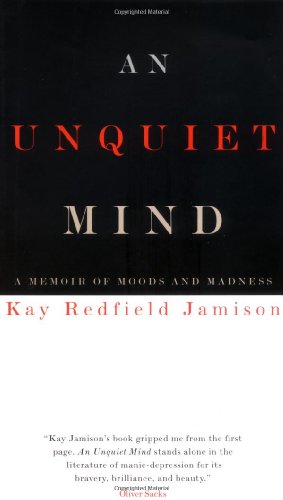 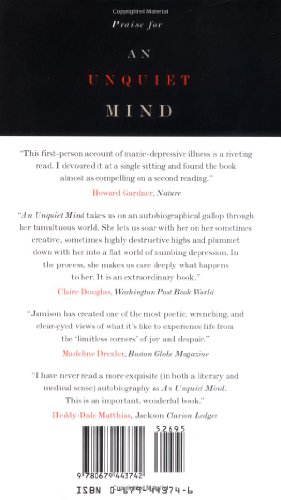